In early 2015 I got an HDHomerun Prime CableCard TV Tuner and set it up to work with Windows Media Center (WMC) on my Windows 7 machine. WMC was on my primary PC until recently because I wanted to upgrade to Windows 10. I migrated my WMC to a Mac Mini running bootcamp and Windows 7. It’s working great! I use WMC extenders to watch TV around my house. My Mac Mini is running headless (that is, there is no monitor, mouse or keyboard attached), so it’s hard to see what its doing unless I remote into it.

I wanted to be able to tell at a quick glance if WMC was busy doing something. That means recording a show, or if someone was using it to watch TV on an extender in the house. I had a spare blink(1) USB RGB LED light, so I decided it needed to become my WMC status light. The thing I love about the blink(1) is how open it is. You can make this USB light turn any color, and program it for any condition. It even works with IFTTT, so it’s uses can be endless.

For my needs, I created a simple PowerShell script to control the light. I wanted it to light up red when a show was recording or someone was using an extender, and green when WMC is idle. I noticed that ehshell.exe is running when WMC is open locally or on an extender. As well as ehrec.exe is running when WMC is recording a show. If a show is scheduled to record then ehrec.exe starts about 5 minutes early. I’m assuming this is the case so it’s ready to record when the time comes. Here’s my PowerShell script: 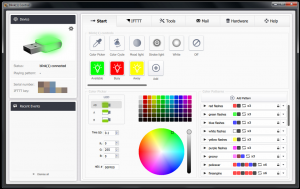 Then I installed the blink(1) Windows GUI software and enabled it to run at startup and also enabled the API Server. blink(1) does have a command line interface, but I like their GUI software since I can remote into the PC and open it at any time and see what color the USB. It’s easy enough to control the light through the HTTP API as well as the command line. It’s your choice on how you want to control it.

Then create a scheduled task to run the PowerShell script at startup. When creating a new task, set the trigger to At startup. The Action is to start a program C:\Windows\System32\WindowsPowerShell\v1.0\powershell.exe with the arguments of -noexit -nologo -noninteractive c:\your_script_location\wmc_blink_light.ps1

It passed all my tests and so far it’s working great! Now I’ll know if its safe to reboot the PC or not!

I know WMC is no longer supported in Windows 10, but the WMC community is pretty awesome, so I’m hoping this helps or inspires someone else!

Disclosure: Some of the links on this website are affiliate links. This means that, at zero cost to you, I will earn an affiliate commission if you click through the link and finalize a purchase.
Share this post: